skip to main | skip to sidebar

I'm hugely exhibited about taking part in this new public art exhibition. It is part of the Groving initiative of Barbara Dougan who I exhibited with last year in the Acts of Resistance exhibition. With galleries and Arts funding proving to be even more elusive and elitist because of COVID we need these new bright exhibitions to reach the public on their own doorstep.

One specially commissioned artwork will appear in a public space each day from 14 August to 28 August in the Suffolk town of Bury St Edmunds, UK as part of the wonderful Silver Spoon exhibition. Enjoy seeking it out within the circled area, leave it for someone else to find, or take it home. Check out all the latest http://www.groveprojects.org/blog 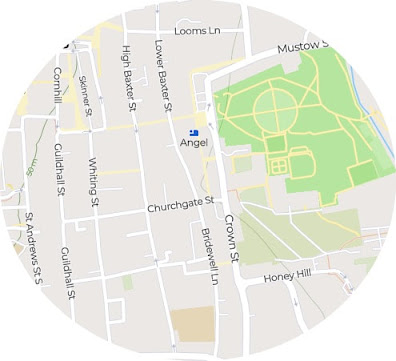 Today's artwork is by Henry Driver. I wrote the words to accompany it. 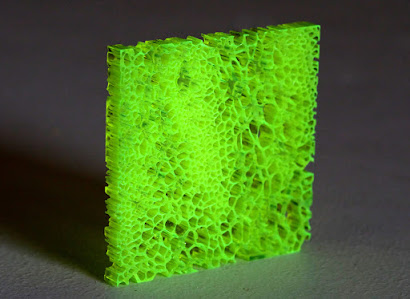 You watched me under the microscope; I know you did

With a snake eye glance like I've never seen, you took me in

You didn’t notice my beauty, no connection, and I

Wasn't looking for you to rescue me

I wondered just which part of me you wanted

I hope you realize I’m not all sweet, all things nice, with spice

You see me under glass, all made up, your fantasy

And it's the lazy way, I’m more than a money tree

Because even white snow fades

All torn out, worn and left behind

So I won't be sad if you change your mind

Bury St Edmunds is dominated visually by the sugar beet factory, which contrasts boldly with the medieval grid and interesting mix of historic buildings that make up the core of the market town. The ‘beet’ also makes its presence felt through the distinctive smell and plumes of vapor during processing.

The factory at Bury St Edmunds started operations in the 1920s, and has been processing sugar beet grown in Suffolk, Norfolk and Cambridgeshire ever since, linking the town inextricably with it’s rural hinterland. During 1973, the Bury sugar beet factory became the largest in Europe when two new silos were built. The refinery processes beet from 1,300 growers – 2 million tonnes – into 320,000 tonnes of sugar per annum. It’s common to see beets, like lumpen severed heads, rolling on the road when 660 lorry-loads of beet are being delivered on average each day.

In 1972, ‘Silver Spoon’ was launched as the retail brand name of British Sugar, selling granulated, caster, cubed and icing sugar. British Sugar now has 4 factories, down from 18, but can still produce as much sugar. It has recently faced challenges including major market Tesco switching to a sugar producer in China, and the campaign to reduce sugar consumption in the face of rising obesity and diabetes.

​And the phrase ‘silver spoon’ can have completely different connotations. Before the place setting became popular around 1700, people brought their own spoons to the table, carrying them in the same way that people today carry wallet and keys. In pre-modern times, ownership of a silver spoon was an indication of social class, denoting membership in the land-owning classes.

Sentinel Trees is an exhibition of miniature art works from 13 artists and 9 authors.
It is part of the Urban Tree Festival 2020. https://urbantreefestival.org/

Trees are Sentinels, guarding and sheltering, standing silently for centuries as our busy lives rush along. Due to the current COVID restrictions and in keeping with the Urban Tree Festival the Sentinel Trees exhibition has been moved online. The art works have all been exhibited in bonsai trees alongside writing inspired by the art pieces.

I was asked to write two pieces for this exhibition and my first one has been exhibited today on a Forsythia bonsai and accompanies the work of legendary London Group artist Bryan Benge. If you don't know his work then please take the time to view his disturbing and evocative short films. 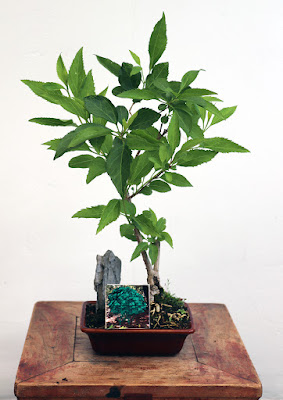 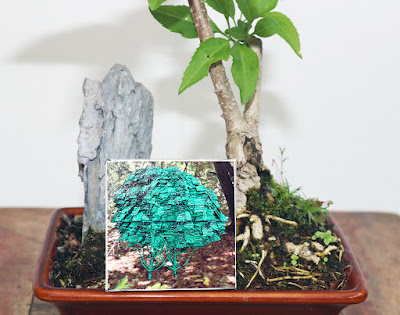 It is coming to the end of the summer holidays and a certain dread starts to creep onto me as I think of the return to school. The dread is not consigned to packing lunches and dropping off children at the gates but also a seeping fear that edges into all aspects of life here in the UK. I have never thought of myself as a 'foreigner' and I will always fight to be part of my community here. Groving, the new exhibition by Barbara Dougan, is one of those activities that brings me closer to artists and writers, that glues me into a sense of my community. It is partly about fighting back personally, but more about resisting together. 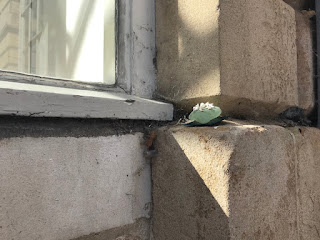 Yesterday Barbara placed a public art piece by Chris Brown on the streets of Bury St Edmunds.
I wrote some words about it.

Poppin' pills is the kowtow
Ride the hills we all know
Eat them on a Sunday
More again on Monday
Highs lowkey at the freak show
My Mum says it’s a no-no
But she’s just jumpin’ on her coco
We’re kickin', we’re shakin', more tremblin'
Don't be lost kin, cos’ we dyin', soon fryin'
Anything can happen at the freak show

High town, you got a big bung like a number one
It's freak night, one big freak show
If you feel like a roll, I found this place where
Poppin' pills is the love we know

Have a look at the other work on display around Bury St Edmunds by visiting http://www.groveprojects.org/blog 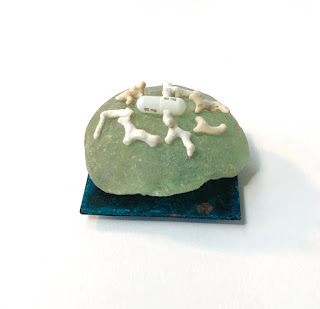 Tolworth Tongue: A poem for Sam 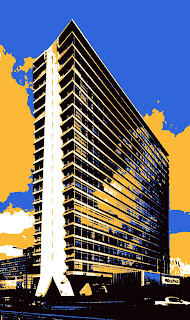 I'm building a tower to rise like our dreams
So the argh of our hopes can drape from the top
Fly the flag chaps that are more than red crosses
Raw tongues that will tick to a scream
Tolworth I love you! 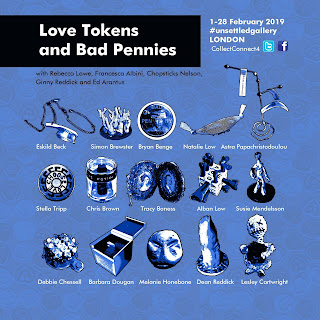 Last year I got involved with CollectConnect's Small World Futures project around London Bridge. This year I'm really chuffed to be invited back for their latest street art intervention Love Tokens and Bad Pennies. It's a cool exhibition that appeals to my sense of fun, freedom and fluidity. It's given me the chance to connect with some wonderful artists and has challenged me with its different themes and subject matter. 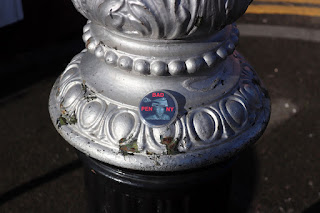 My first piece has been published today alongside Bryan Benge's bad penny in Walthamstow. Bryan is a legend of the UK art scene, a man who does so much thinking and creating behind the scenes (even though he's a member of one of the most influential art collectives in the London Group). Please keep reading the CollectConnect blog to see more of my words alongside some wicked artworks.
Posted by Ed Arantus at 01:25 No comments: 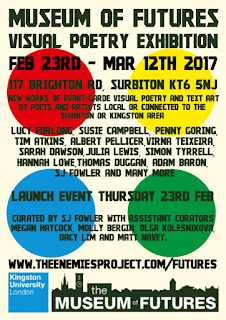 Recently I've been interested in experimenting with Algorithmic Poetry. Last month I had my first poem published on the Poetry WTF?! website. It was based on Rudyard Kipling's If and used a set of simple rules to reconstruct a new poem using Google.

Algorithmic approach: Type line of original poem to seed search engine.
Stop typing before predictive line reverts to original.
Use the predicted line.
Do this for each line in original poem.

I'm really pleased that I will be exhibiting a new version of this work as a visual poem at the Museum of Futures in February 2017. I have once again taken If as my starting point and interestingly the algorithmic system has already created another variation despite only a month passing between Google searches. The new poem is called Goggle If and depicts all the search boxes that helped create it.

Over two dozen poets and artists local or connected to the Surbiton or Kingston area, present brand new works especially made for this group exhibition. Exploring the visual and material properties of language through concrete poems, abstract painting, asemic writing and many other avant-garde techniques, this exhibition aims to bring together generations, and methodologies, through a shared engagement with the participants localism.

Partnering with the Museum of Futures - a dynamic community arts space that has engaged Surbiton residents, families and businesses since 2015 and curated by The Community Brain CIC, the exhibition aims to showcase early career poets and artists alongside more experienced practitioners and build on the community, beginning new relationships and collaborations, that already surround this wonderful venue. The engagement with themes of suburbia, the Seething mythos and the humour so prevalent in the Museum of Futures enterprise will undoubtedly also influence the exhibition's aesthetic.

There will be an event to launch the exhibition: A night of collaborative poetry readings on February Thursday 23rd, full of newly commissioned collaborations readings
Curated by SJ Fowler with assistant curators Megan Haycock, Molly Bergin, Olga Kolesnikova, Dacy Lim and Matt Navey.

I've always been interested in reading, books and libraries, it is one of my greatest pleasures outside of my children and gambling. I haven't had much time to make art this year, but have snatched an hour a week to help out on the UK Chapbook Chart website. Each chart run-down introduces me to a new author or chapbook and over the past few months I've discovered the poetic work of the Combed Thunderclap. His/her/their work sits, cut and spliced in Issue #1 of the Poetry WTF?! chapbook. 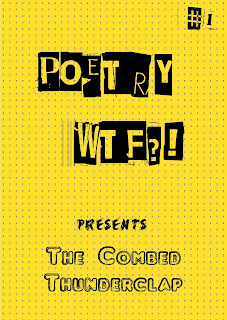 Poetry WTF?! immediately appealed to the discordant nature of my life. In my mind over any normal day I deconstruct and stick life back together like an ugly Lego model. On the site there are a range of categories (Remix Poetry, Sculpture Poems, Mutated Poetry, Neon Light Poetry and Algorithmic Poetry) that any writer can apply themselves to and submit.

The gambler in me was attracted by Algorithmic Poetry and I set up a framework to play a game of poetry. My rules looked like this...
Type line of original poem to seed search engine.
Stop typing before predictive line reverts to original.
Use the predicted line.
Do this for each line in original poem.

After a few rolls of the dice I found the perfect poem for my game was Rudyard Kipling's If.
Read it here on the Poetry WTF?! website.
One of things I like about this approach is that I will be able to re-type the poem each year, or from different locations and a new poem should materialise.

I see from Amazon that Issue #2 of Poetry WTF?! chapbook is ready to be released and I'm obviously excited about getting my hands on a copy.
Next for me is an experiment with film dialogue and speeches using the same algorithmic method.

Where one step before
I'm Spartacus
is
I'm sorry I haven't a clue.